Voice spoke to me like a lullaby,
It was deep and a hint of misty,
the stars can’t shine without a black sky,
I drank red wine, you drank whiskey.

It was a lovely dream while it lasted,
So, let us forget what the past did.

In my chest, my ribs protect,
Hard bones, a dying fire,
An empty void I neglect,
Surrounded by electrical barb wire.

My demons awaken,
The wolves, howl with the full moon,
Every creature which sleeps inside. God-forsaken.
What a sad, lonely tune.

They confuse my kindness,
Assume it is weakness. Sinister grin.
I introduce hell,
It wears my skin.

Together we sipped our tea. Sweet and milky. Peaceful Harmony.
Silence broke as the world woke from its sleep,
Her eyes cut through the morning ray. “I devour darkness. Eternally.”
“He is my love, my sweetheart. But cannot live when I’m near.” Weep.

She is my source of life, no need for fear,
For when she’s around. Time had fled.
I took a glimpse to her seat. Gone. I shed a tear.
She was my sun, my day. Widespread.

The world was asleep, a trespasser in my presence,
cloak woven with shadows; I knew then. Darkness.
I trembled in my seat. Breathe, smile, patience.
His love was day, the sun, the light. He could not be heartless.

His black deep eyes stared into my soul,
He spoke, “I do not ask for much child,”
Voice deep and cold, “I am what you cannot control.”
“I am fear, the unknown, dangers of hope.” Cunningly smiled.

He was my desires in physical form. Maybe upside down.
Although, I was no longer afraid,
I was allowed to dream, to desire, with him around.
He was my moon, my night, my fantasies in a darker shade.

Confined between the four walls we call home,
So, we are told. As we press pause on life,
For a glimpse of hope we pray, for the world, for Rome.
I wonder, will this give us flowers and harmony, or simply more strife?

Yet it puts me at ease,
The knowledge that nature does not discriminate, or care,
Time pursues. Thus, the days we must seize,
April, blue skies, wet grass, warmth of the sun in the air.

The prisoners of the epidemic need to breathe,
Open a window, watch the world thrive,
Without human life. Birds singing down beneath,
With humanity and spring, the human race shall survive.

The flowers once beaten by foot prints,
Now finding life with the rain,
Staring down at the city through stained windows, ever since,
The plague that took over. The suffering, the pain.

It was anticipated, expected, planned. The future foreseen.
Not in a tiny ball perhaps but, it was bound to creep back
This lonely feeling. Every human being,
Falling asleep to the city’s silence. A unison soundtrack.

I miss even a singular touch. Already?
The intimacy of a warm hand. How petty.
Lips rubbing on my back, neck and cheeks.
The memories of physical affection, feels like weeks.

Yet, why do we complain? With such foolishness,
Loneliness sings us a story, the truth. Whispers and secrets.
A sky crying. The crescent moon aligned, stars luminous,
Our eyes scanning for a pleasant presence. Restlessly seeking.

I am all alone,
My sanity in half, its torn.

This one is about you, mystical creature,
Created by the core of nature’s own hands, blood that’s silver.
Beauty is her weapon, power, deadly at its best
Destructive in the best way possible, never turns down a spell request.

The creature surrounds herself with crystals,
For she is the daughter, the witch of the enchanted forests,
Many men have tried to take her down, pointing their pistols,
Miserably failed and she held her head high, continuing her performance.

Her hair was birthed on this very day from the ashes,
Eyes from the tides of the oceans, her voice ever so in tune,
Skin like the winter, cold yet sweet,
A mystical creature, born on the edge of the crescent moon.

Happy birthday to you Alice,
For you are my special golden chalice.

A wildlife full of magic, filled in her belly
Let us embrace the wonders of motherhood,
A gentle breeze blows onto your skin. Steady.
The comfort of relief, the smell of berries and oak wood.

Her features are soft and delicate,
Yet, a fierce struck of thunder in her eyes,
The voice of an angel, almost heaven-sent.
Isolation, dull flowers, nature finding life. A pale Sunrise.

A mother knows when to wrap her arms
Around her child, in a protective gesture.
Kisses away the fear with love and charms,
It may cut straight through our core, with a feather.

A poem written for the isolation of Mother’s Day. A celebration for my lovely mother and all mothers around the world, these are hard and difficult times, yet you’re holding on to life strong and keeping us safe regardless. A massive thank you to you all.

You claimed with all your might,
To know me better than,
The skies knows the kites,
You believed, deep within
You have figured me out,
But struggled to see the rivers,
Running down my spine,
Or the stony pathway to the castle,
Buried behind the forests,
Inside of my heart.
You were yet to discover,
The breeze my breath left,
On your skin,
Or the fingerprint marks,
That stained your bed sheets,
You tasted my snow storms,
You feared its form,
You ran away from my winter,
As you said it is too cold.
I watched you ran away,
Like a coward,
Before my spring able to come along,
And give you a bit of warmth.

Johnny Turner fell tragically while climbing a block of flats in central London. He was 23, and leaves behind an impressive body of photography.

Johnny Turner was a talented free runner and photographer. He had a special “touch” when landing his jumps, balancing elegantly on thin rails or walls almost without making a sound. He also loved London’s architecture – from train lines to abandoned construction sites to tower blocks and housing estates – and photographed it obsessively. Johnny was able to combine these two passions in urban exploration, an activity that took him to parts of the capital most people never see.

“He was the type of person who would just ride his bike and do parkour so naturally, he came across these environments from an early age,” says Will, a friend of Johnny’s. “He grew up in Balham in south London, so he’s always been around places like Stockwell, Brixton, Clapham. I think that’s why he drew a connection with this type of architecture.”

In September 2019, Johnny fell to his death when climbing a block of flats in Waterloo. He was 23 years old. 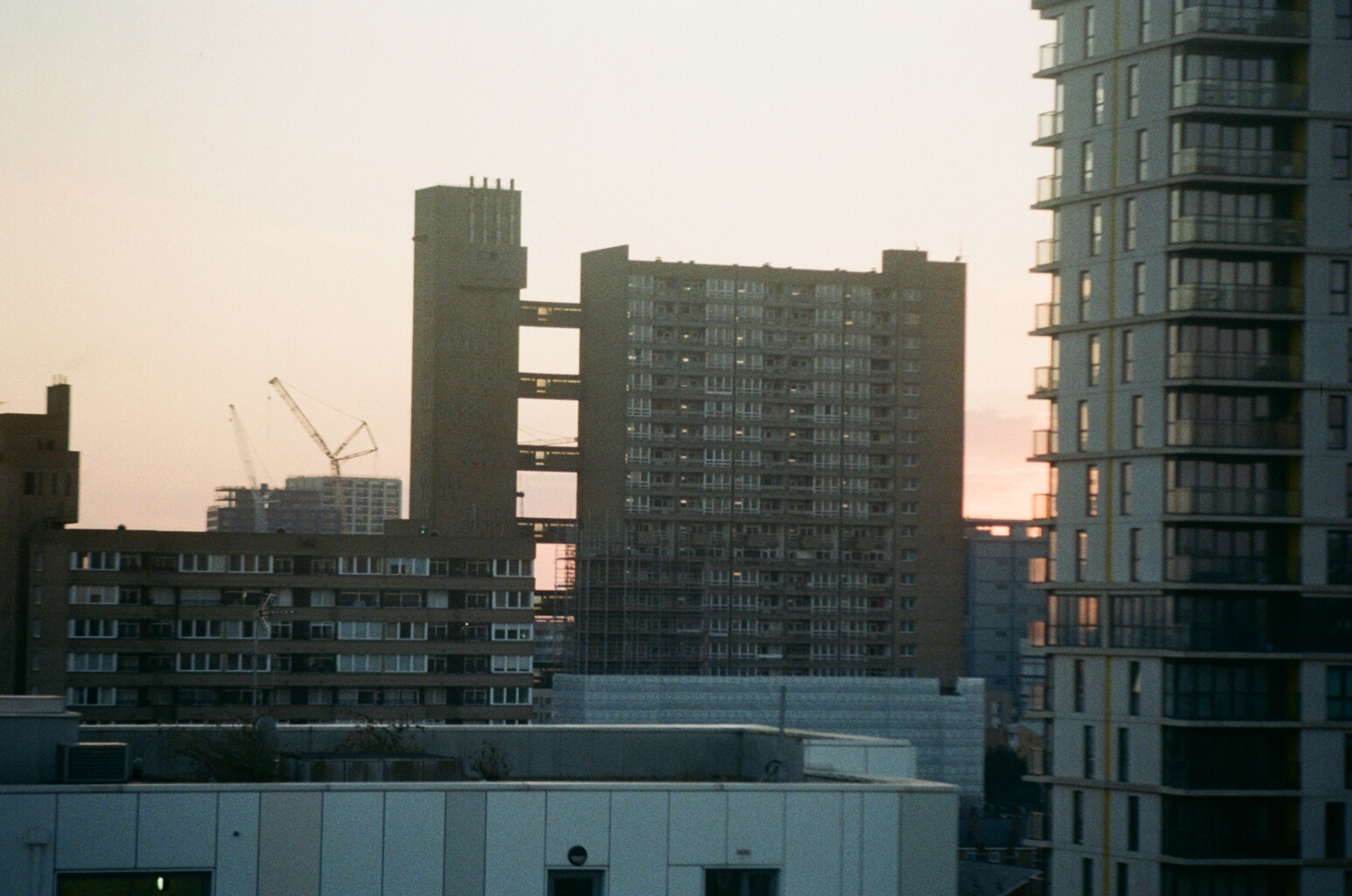 Urban exploration, also referred to as “urbex”, is the practice of entering or climbing a city’s uncharted buildings. It could be the top of a block of flats, an abandoned building site or in the case of Bradley L Garrett, who scaled the Shard in 2012 and brought the often nocturnal activity into the spotlight, one of its most iconic skyscrapers. Many “explorers” take photos of the views they encounter, often sharing on social media. London-based urban explorer Harry Gallagher, also known as @night.scape, has more than 240k followers on Instagram and posts shots from the sides of buildings and inside tunnels. Ally Law has earned over 3 million subscribers on Youtube with his urbex videos, and once broke into the Big Brother house. Viral videos of urban climbers like Vadim Makhorov and Vitaliy Raskalov, who run the YouTube channel On The Roofs, have also brought the activity to the mainstream. The hashtag “urbex” now has over 7.5 million entries on Instagram.

Like any extreme sport, urban exploration carries certain risks. Depending on the kind of building an explorer decides to climb, floors can be unsafe or even collapse, while bad weather conditions leave scaffolding wet and slippery. Abandoned buildings are littered with trip hazards that may be impossible to see in the dark, when many urban exploration missions take place. Entering a building without permission can also be considered trespassing, and in some cases punishable by law.

Roman, another of Johnny’s friends, says that he knew the risks involved with urban exploration and was respected within the community. “If you do it [urban exploring], it’s not necessarily dangerous, because with everything you do, there’s always calculated risks,” he says. “You’re not going to take a risk you know you’re not ready for.” 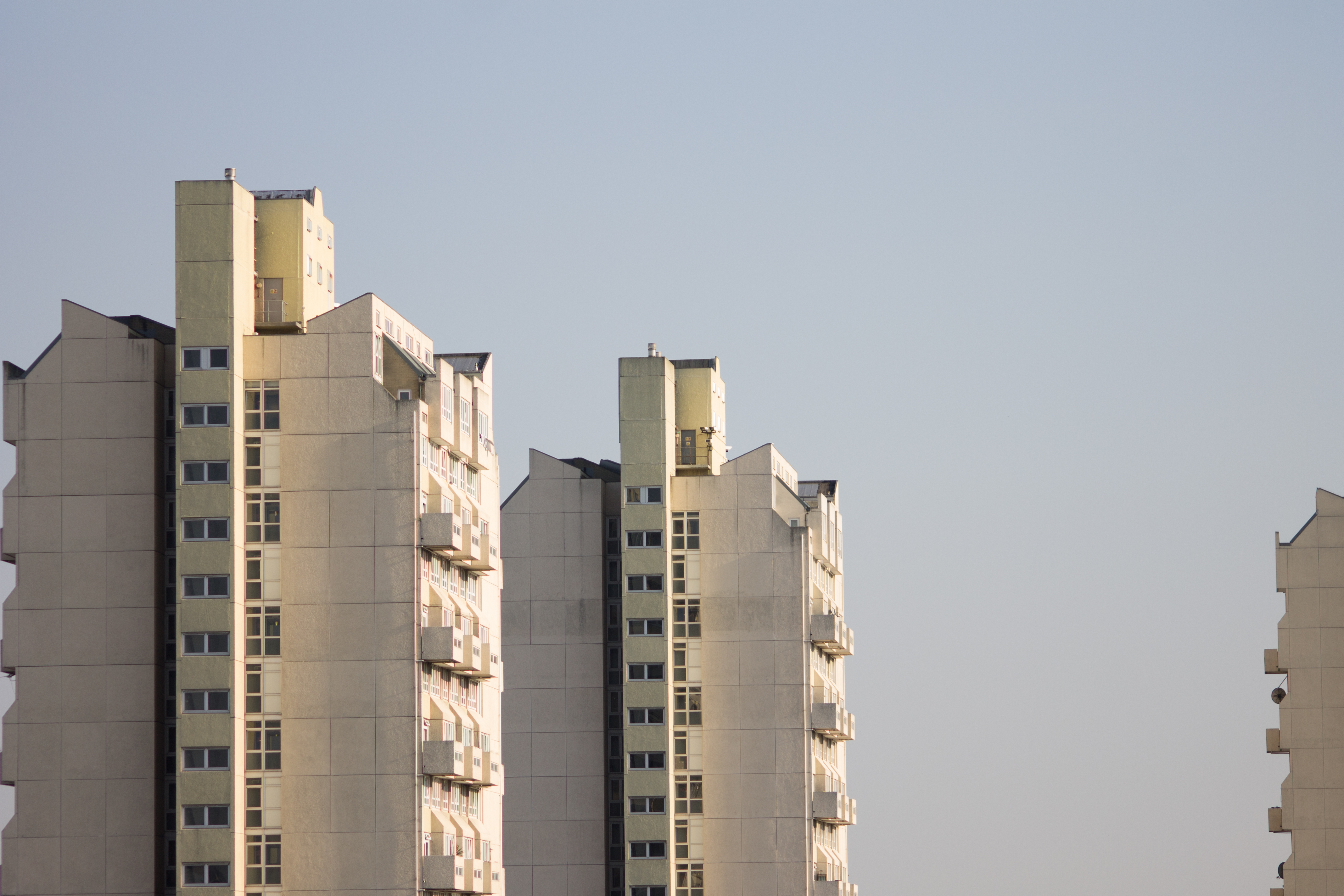 TWO TOWER BLOCKS IN STOCKWELL, SOUTH WEST LONDON, NEAR WHERE JOHNNY GREW UP.

Johnny leaves behind a fascinating body of photography that shows London from a completely new perspective. One photo centres on two tower blocks in Stockwell, not far from where Johnny grew up. Another was taken on the Golden Lane housing estate, which he used to describe as the “hat” on top of the block. He also photographed the Wyndham and Comber estate in Camberwell, a popular training spot for parkour that featured in the music video for Goldie’s “Inner City Life” – his favourite song.

“Johnny found beauty in the grittiness of tower blocks,” says Will.

Johnny’s goal was to document these buildings before they disappeared. According to a study from the London Assembly, redevelopment projects between the years 2004 to 2014 led to a drop in social housing, and a huge increase in private housing. Many council estates and tower blocks that were not listed buildings were demolished. The most famous of these is the Heygate Estate, a housing estate in south London made up of more than 1,200 homes that was demolished between 2011 and 2014 as a part of a redevelopment plan for the Elephant and Castle area. 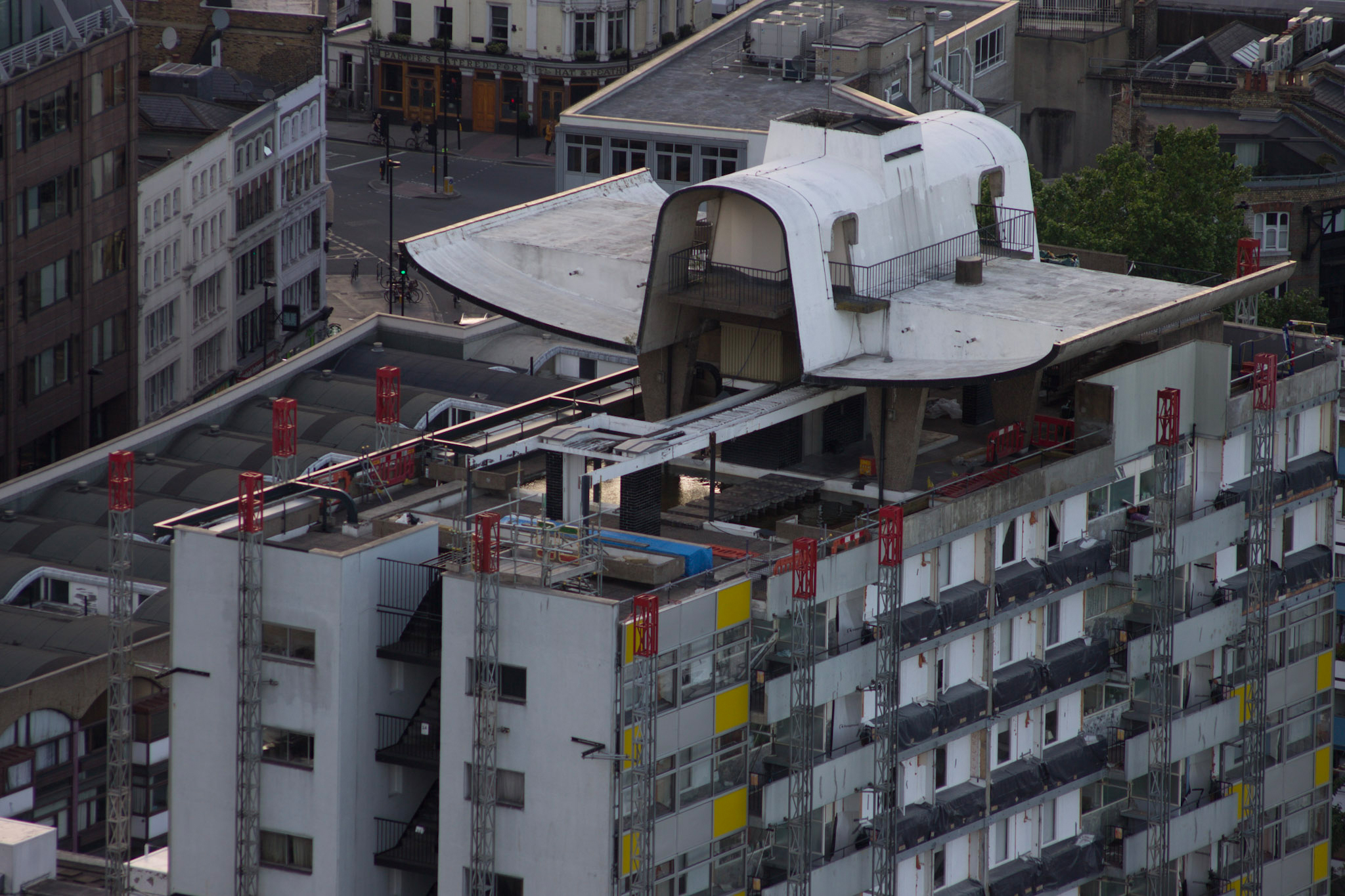 THE “HAT” JOHNNY DESCRIBED ON THE TOP OF THE GOLDEN LANE HOUSING ESTATE.

It wouldn’t be unusual for Roman’s phone to ring at 2 AM and for it to be Johnny’s number. He would answer and listen to his friend enthuse about cycling to east London to “check out a new spot.” Sometimes, though, it was a struggle for Roman to keep up with Johnny. “He was the king of the blocks,” he says. Johnny’s friends hope to one day show his photos in an exhibition.

Johnny loved urban exploration despite the risks. But what is it about seeing London from often dangerous viewpoints that can be so inspiring? “For different people, it’s different reasons but the biggest one is simply that they are extremely beautiful and striking and carry a very powerful aesthetic experience,” says Barnabas Calder, an architecture historian from the University of Liverpool and author of the book Raw Concrete: The Beauty of Brutalism. 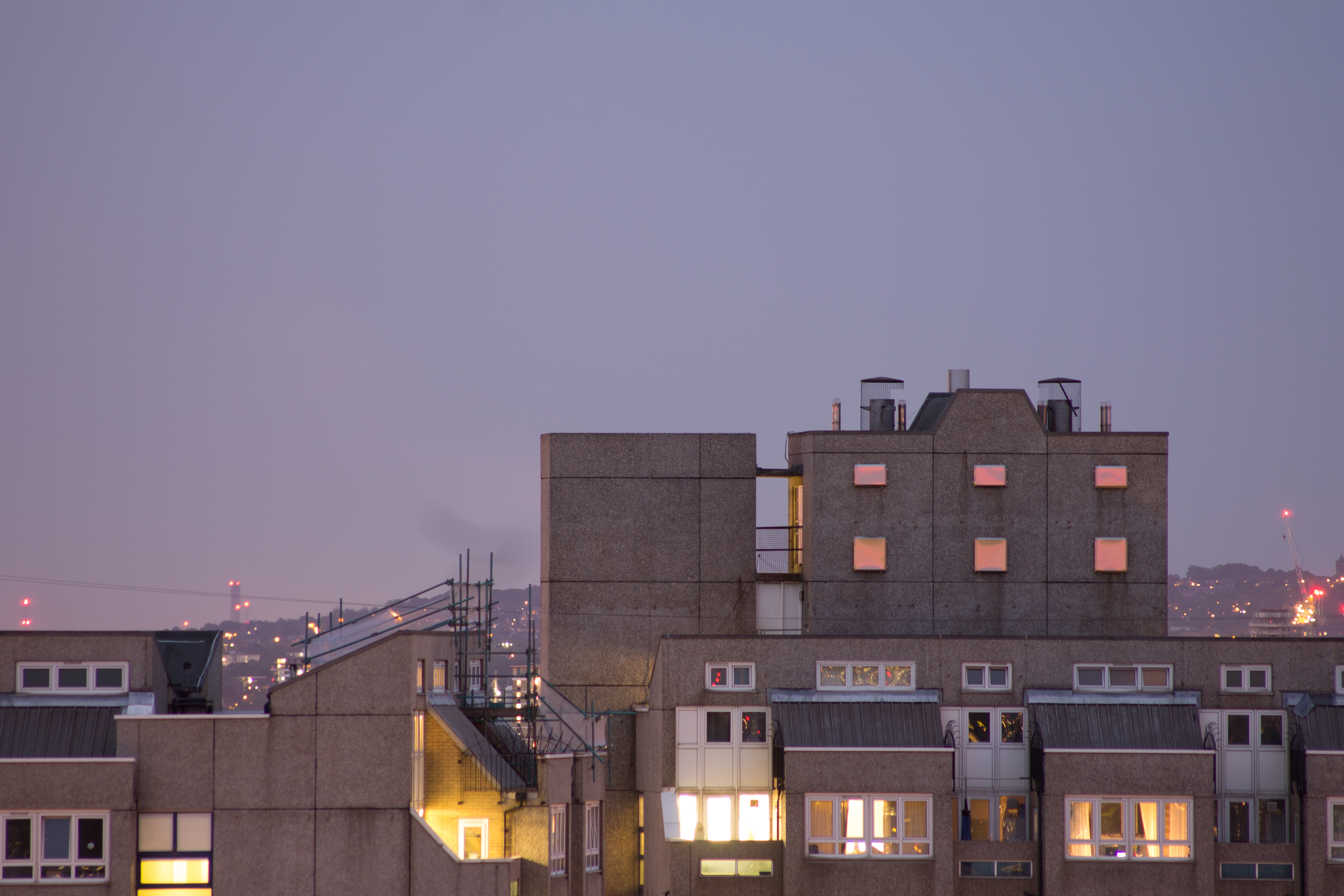 Calder adds that London’s council housing is also interesting from a social history point of view. “Its [aim] was to improve the housing of ordinary people, and bring up the lowest standard of housing to the highest quality, in terms of technical performance and quantity of housing available.”

For Roman, urbex is about more than just a beautiful photo or even a building’s purpose. “As much as it’s about getting the view and sights it’s also a mission,” he says. “It’s a journey.” 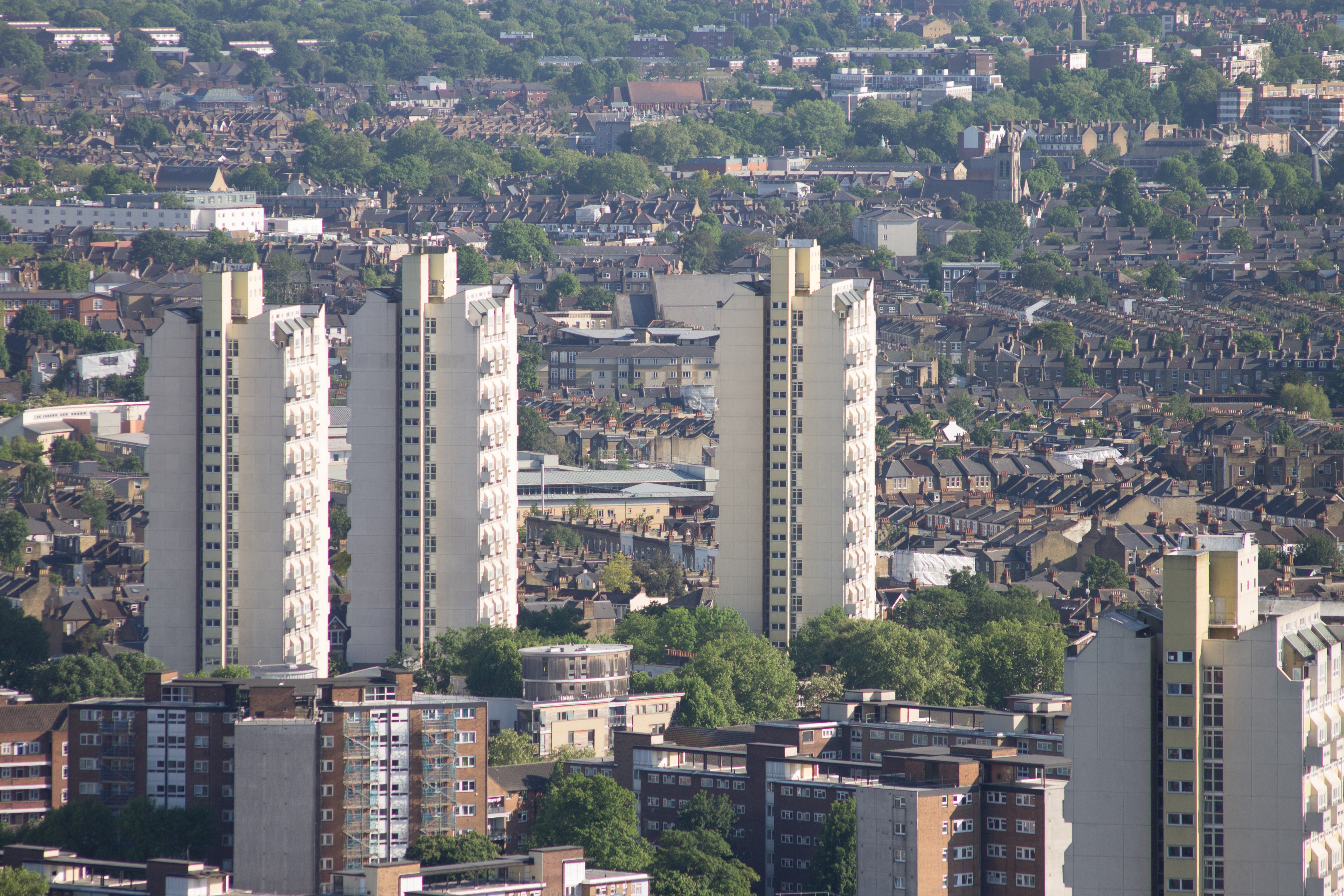 Pedro, another friend of Johnny’s, sums up why he thinks Johnny loved urban exploration.

“For Johnny, it wasn’t about being on a roof and doing dangerous things – despite what people may think,” he says. “It wasn’t even close to that. His passion was to document the constantly changing city.”